When a six-year-old girl who was critically in an apparent robbery gone bad later dies and is found to have tested positive for a sexually transmitted disease, detectives investigate the family, the store clerk, and the son of a prominent attorney who had appeared to foil the crime. After evidence turns up that the little girl’s older sister was dating the alleged sexual predator, Cabot has to work some legal magic to erradicate the deal that had been made with the older sister for her testimony. [ Recap available. ] 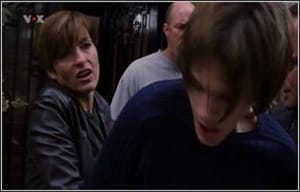